Do you have a testimony to share? We would love to hear what God is doing in your life!

–Knee Pain is No Match Against the Name of Jesus!–

“A friend came for a visit Thursday evening, and at the end of the night she mentioned knee pain. Oh, good! We prayed, heaven come…40% better. Prayed again…90% better. As she walked around, she couldn’t find the pain. Now, 3 days later, she’s feeling really great! No pain; full mobility, and she’s looking for someone to pray for, too! Thank you, Jesus!”

“I prayed for a man today. He injured his knee a few weeks ago and said the pain has been getting worse and his knee was visibly swollen. He was walking with a limp and could barely bend it. Needless to say, God is good! God healed the man’s knee while he was drinking a beer and smoking a cigarette! Lol! His knee was 100% better and the inflammation went away… he was doing squats with no problem! He was totally not a believer by his own confession. I just explained that God loves him unconditionally. Glory to God for His goodness!”

–Miracles at the Train Station–

“As I was walking in Boston the other day, I stopped to talk with a homeless woman sitting on the sidewalk at the train station. I asked her if I could pray for her. As I began to pray, she pointed to her ear. She said a man had tried to kiss her and she pushed him away. When she did, he hit her in the ear. It was swollen and had a blood spot on it. As I prayed, a look of shock flashed across her face and she said, “It is gone! The pain is gone!” The swelling looked better and we agreed that God was completely healing her ear. She believes in Jesus—and as I walked away we both agreed that the day had gotten much better.”

–Woman Healed at the Shoe Store– 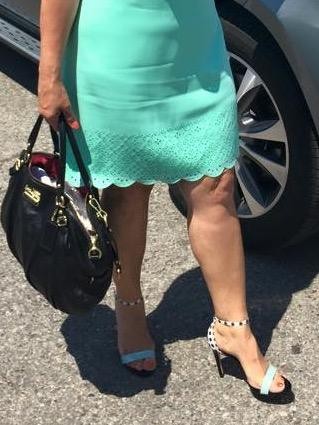 “While at Clark’s shoe store the other day, I saw a woman with a boot on her leg. She said she sprained her ankle while wearing heels. I noticed a cross necklace on her and asked her if she asked God to heal her. She said, ‘I have been praying and I thought about using anointing oil to get healed faster, but haven’t gotten around to it.’ So I said to her, ‘Well how about we agree together to heal you now. Two or more agreeing in prayer is more powerful.’ As I prayed I asked Holy Spirit to come and His power to heal her in Jesus Name. Right there in the shoe store, she had her hands up praising God, saying, ‘It’s done! I believe I am healed! Give me your number and I will call you with a testimony tomorrow!’ I asked her to check out her ankle, but she said, ‘No, I want to wait until tomorrow…you see it’s my daughter’s bridal shower and I want to wear my heels…so I will call you tomorrow.’

The next morning I received a text from the woman I prayed for. She said she was able to take her boot off and wear shoes!!! Yay Jesus! Yay God! She thanked me for praying for her and then sent me this picture of her on the way to her daughter’s bridal shower…in her heels. The caption under it read, ‘God is good I’m wearing my heels, wish u a blessed day.'”

My mother-in-law went in for surgery for a skin lesion on her skin. We prayed it would fall off before she ever had to get surgery. The day before her surgery, it dried up and fell off.

A man I prophesied over said he came in with a lot of pain in his body. He said after I spoke to him, his pain was completely gone.

I went out to dinner with a friend who is not a believer and does not want to hear about Jesus. She had some pain in her back so I asked if I could pray. I prayed and the pain started to leave. The next morning she called me and said for the first time in months she woke up without having to take Advil. It gets better!  She told her sister how she got healed and then her sister asked for prayer and got healed too!

This past week one of the women who works with me had severe back pain. I told her about a previous testimony of an appendicitis healing, but she didn’t want to get prayed for. The following day, I asked her if I could pray again and she said yes. I asked if I could put my hand on her while praying in front of everyone walking by. I commanded the pain to go and asked her how she felt. She said she was very happy. I told her to tell me how it is later. I walked away and about two minutes later, she runs up to me and says all the pain is gone!

My daughter in law came up to me a week ago and told me the baby is very small and the umbilical cord is an issue so they might have to give the baby shots to develop quicker so they can induce her early. I looked at her and said, “Don’t partner with that and give me a couple of days to pray.” I invited her to come to church, but we didn’t have prayer that day. So I grabbed Mary and we prayed over the baby and my daughter in law. Two days later, I heard back from her that after getting another sonogram, they found out the baby was 4.5lbs (which is big) and the umbilical cord is not an issue.

–Full of Joy in the Restaurant–

I went to go surprise my husband with Chinese food. I met this woman at the counter. She opened up to me about her daughter just getting out of the hospital while fighting cancer, taking care of her three little kids and how she just lost her mom. So I said we should pray about it. We grabbed hands while standing in the restaurant and started praying. Then the Holy Spirit showed up. By the time we were done, she was so full of joy she wasn’t touching the floor. The whole restaurant had turned around to see what was going on. She had tears in her eyes and asked me what my name was. I told her it’s not me, it’s God. He is a God of miracles and He loves you.

I go to an exercise group every Friday and we have some refreshments with each other. One woman had to leave early. So I said something to her and she replied, “I can’t hear in this ear.” So I told her that I’d love to pray for her and that I know a God who would love to heal her. She let me pray for her, and then I asked her to check Her ear. She exclaimed, “I can hear!”

About a year and a half ago my family went to this restaurant. There we met a waiter who was in his twenties, has a history with DWIs, and lives alone.  So we started praying for him. I just dropped little nuggets here and there when we would see him, and that we were praying favor over him, and that he’s doing the right thing getting his life together. So today my husband and I went out for lunch and saw him. He came up and wrapped his arms around me and said, “I got my license back. The courts had favor with me.” I told him I had been praying for him for over a year. He was amazed and started asking what church we go to.

–He is Greater than Alzheimer's and Dementia!-

I was at work, working with Alzheimer’s and dementia residents, and it’s not too often residents have moments of clarity. I was giving one of the residents care and she looks up at me while I am internally wanting to do anything but stay there and says, “You’re a Christian aren’t you?” “Yes,” I replied.  She responded with “I knew you were because Christians are the nicest people.” It stirred something in me, so I asked God to come into that moment. I sat there and told her being a Christian is more than following the rules, it’s about a relationship with God. In that moment, the dementia got to bow down and I got to love on her with the love of the Lord. It was a reminder that it is so easy to engage with the Holy Spirit and that the dementia and Alzheimer’s must bow down when I walk into the world because He who is in me is greater than he who is in the Alzheimer’s and dementia.